Capra and Neruda and much much more

*It is interesting to observe an adult to talk with a child.


In other words, an adult to ‘play’ with a child.

My observation is, very few adults know how to interact with a child.

Occasionally, the child speaks lines like a mature person and that too in timely manner. Most of the adults slip here, taking the lines ‘personally’ and either defending oneself or attacking the child.

So, the primary condition to be talk-able to a child is- capability of handling one’s ego.

When the child behaves child like, adults confuse it with immaturity, particularly in the matter of time and handling things. 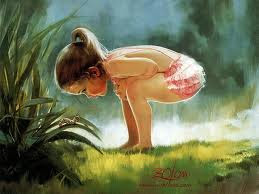 For the child, time does not exist. For the child, it doesn’t matter whether the thing is precious or delicate or dangerous; as for her, the value of the thing is only playable or not playable. And, child has the amazing ability to play with any available thing, from snake to fire to pebble to leg to…

So, adults can not enjoy the amazing imaginary world of fantasy, playing with things differently and creatively.

Also, when addressed from the same level, as a friend, the child displays unimaginable responsibility.

Some enthusiastic adults are over attentive to inform the child ‘facts’ around her. It kills the beauty of wonder sometimes.

Hear, the adult have to keep the balance of a scientist appreciating the poetry, like Capra admiring Neruda.

My observation is: the child IS Capra and Neruda (more than that, unlimited potential) ;she can admit that the moon is a satellite and still address her as her maternal uncle.

@Eva learnt few magic tricks from Salimbhai. While she was performing it before a group of teachers, all of them, laden with their childish ego, ‘caught’ her trick before she finished her performance!

@at SRG workshops, Rakesh, Sonu, Harshavi, Jayeshbhai…are her friends, appreciating her continuously at the same time indulging her into learning tasks, academic as well as creative (or creatively academic!). Not a single negative remark, only friendliness, giving ‘helping’ hand considering her psycho-physical limitations and supporting her world of wonder and imagination.
Posted by chhaya at 22:34 No comments:

While switching to Gujarati medium, Eva has problem in recognizing numbers in Gujarati language.


She could identify ૩૭ as 37 but could not spell or speak it as સાડત્રીસ.

I thought of few activities to support her to overcome this difficulty.

We planned a chart and prepared paper strips, but, I changed my mind and we didn’t write anything on them.

After spending one and a half month together, I have realized her capacity of learning, and it reminded me not to give her this support.

But, this time, I knew, it is not needed.

When we sit at home for her Math homework, I continue speaking English numbers because I saw that it was comfortable for her.

She new એક (1) to દસ (10) due to family background but never used it in her Math tasks. She started applying it now.

Only last week, she shared a lovely story of her : " you know, one boy in my class has bavvan (52) roll number and the other has ogan pachaas (49) ! I have only Eighty three. How good it was if I had a number like them ! Bavvan, Ogan pachchaas! "

Those numbers, awkward according to teachers and parents, were a thing of praise and wonder for her.

She is learning on her own, from her Gujarati medium environment.

We started speaking the tables like this : she would speak in English and I would repeat it in Gujarati.

Just after two days, she started, on her own, like this : I would speak a line of the table in Gujarati, she would not repeat it, she would speak the next line in English.

In this whole incident, I have not guided her for a single time. She switched over on her own.

The beauty of Eng and Gujarati number is yet to explore, I am awaiting that moment.
Posted by chhaya at 13:35 No comments: